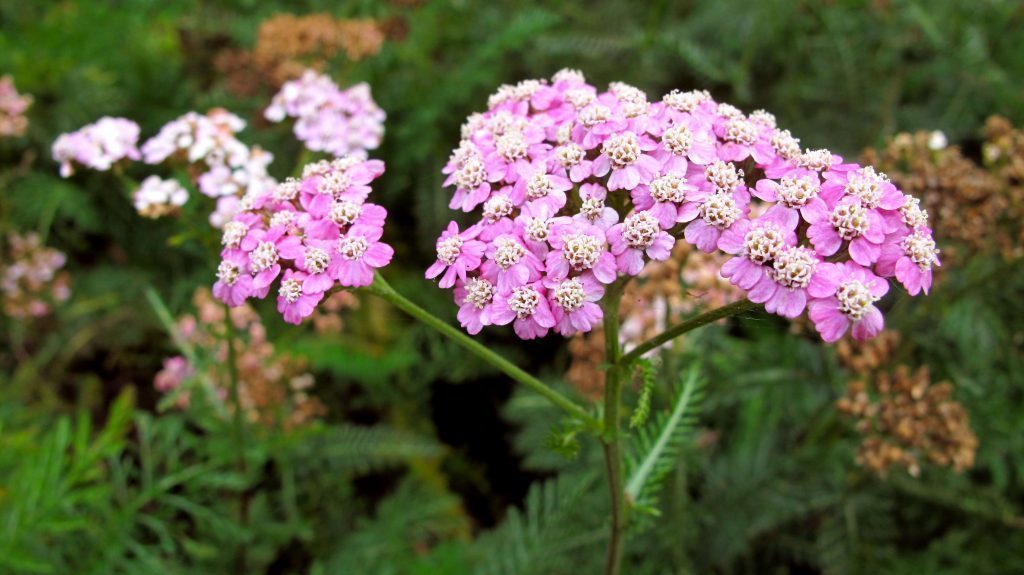 Identification:  Yarrow can be found growing everywhere, in grasslands, meadows and by the roadside. It has alternate leaves which appear very feathery, having many segments. this is where it gets its genus name ‘millefolium’ from – for having a ‘thousand leaves’.

Yarrow flowers from June to September, with flowers being white or pale lilac which appear like minute, flattened daisies. Yarrow too is a member of the daisy family. The whole plant is finely hairy, with white, silky hairs.

Edibility & Nutrition: Yarrow leaves can be eaten as a food, raw or
cooked though it is not primarily known as a food. The leaves are
slightly bitter, so best used as an addition to salad rather than as a
main ingredient. Best when young.

Growing & Harvesting: Yarrow can be found growing in grasslands,
meadows & roadsides. It is an abundant plant, and its aerial parts can
be harvested just as the plant is coming into flower from June to
September. If you want to gather Yarrow for wounds in a first aid
context, its leaves can be picked most of the year. Yarrow is a hardy
perennial, suitable for growing in most climates; it is very easy to
cultivate, spreading both by roots &amp; seed. It prefers sunshine & a fertile
soil.

Parts Used: Above ground parts collected when in flower

Pollen from Yarrow plants among other medicinal herbs was discovered at a burial site for a Neanderthal man as long ago as 60,000 BC, indicated the importance of this plant throughout human history.

Even as recently as the twentieth century it was considered lucky to attach a sprig of yarrow to a child’s cot to bring a long and healthy life.

In the Scottish Highlands, Yarrow was used in healing ointments and was burnt as an insect repellent, as it also was in North America. It has since been found to contain strong repellent compounds.

Legend has it that Yarrow was the plant used by Achilles to staunch the bleeding wounds of his soldiers, which is where it gets the name Achillea from. The Ancients called it the Herba Militaris, or the military herb for its great reputation as a wound healer. The Gallic name for the plant, Lus chosgadh na fola, means ‘the plant which staunches bleeding’.

The herb is associated with masculinity, power and virility.

It is also known as Nosebleed, for its ability to stop bleeding from the nose, though some state to the contrary, that the leaf stuck in the nose can relieve headaches through causing a nosebleed.

Yarrow was one of the herbs dedicated to the Evil One in earlier times, and was used for divination in spells, or to reveal one’s true love.

Preparations & Dosages: Yarrow is a versatile herb with many internal & external uses, so a wide range of preparations can be made: teas, tinctures, vinegars, ointments, creams, poultices. Yarrow combines well with Nettle, Hawthorn, Miseltoe and Lime Flowers for High blood pressure; and with Elderflowers, Peppermint, Cayenne and Ginger for colds and feverish conditions.

Contra-indications: People with allergies to other Asteraceae (Daisy family) plants should be careful. Yarrow is not recommended in pregnancy.