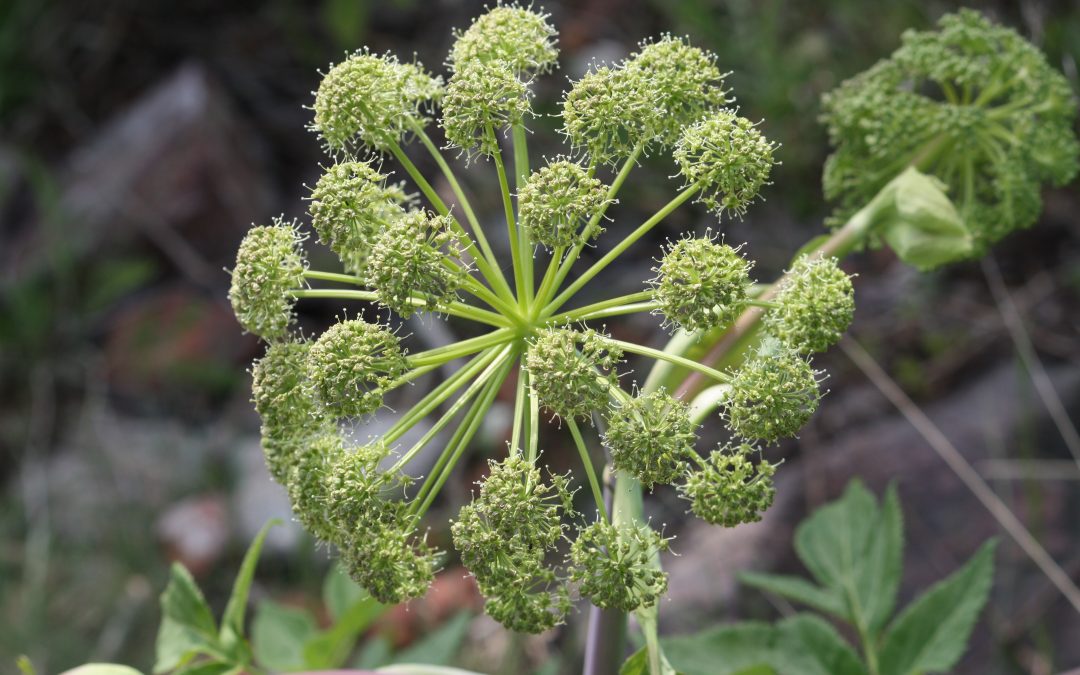 A.sylvestris is a tall, statuesque biennial wild species with hollow stems up to 2m high. The stems are often purplish and not hairy. The inflorescence is in umbels and flowers are white or pink. The fruits are oval, flattened and winged. Wild Angelica is commonly found in damp, grassy places and open woods, fens throughout Northwestern Europe except in Arctic uplands.

A. archangelica is the cultivated garden species which contrasts with Wild Angelica with its green stems, greenish flowers and which is usually stouter and taller. It is also a herbaceous perennial

as opposed to a biennial like the wild species. Garden Angelica can grow up to 3.2m and is native in Denmark & Germany.

Growing & Harvesting:  Both species can be cultivated in Scotland. Because of their large size they will need sufficient space. A.archangelica seeds have very short periods of viability and will fail to germinate if sown later than December/January after fruiting. They are best sown directly in the autumn.

Both of these Angelicas are edible, and have a long history of use as foods, candies and flavourings for different liqueurs and spirits.  The leaf stalks of Wild Angelica can be eaten in savoury dishes as a celery substitute and also be combined with rhubarb in desserts. The

Encourages active movement of fluids through the body, normalises function

Both species have similar actions & constituents and can be used interchangeably. The Garden Angelica has a higher volatile oil content, making it a more potent medicine, and the Wild Angelica gentler and more suitable for children.

Relieves congestion in the uterus

Different preparation methods will bring out different constituents & properties of Angelica: boiling the root produces an aromatic bitter, infusing the root an anaesthetic astringent for the stomach lining, and alcohol brings out its relaxing & antispasmodic properties (Michael Moore).  Small doses have a central nervous system (CNS) relaxing quality; while excessive doses cause depression of the CNS.

Angelica archangelica is a stimulating bitter, so be cautious in conditions of digestive excess: hyperacidity, inflamed mucous membranes, peptic ulcers and reflux. Excessive doses of Angelica tincture eventually lead to CNS paralysis, if taken in full doses it requires breaks of four days every two weeks.

Angelica is contraindicated in pregnancy & diabetes, and also contains furanocoumarins which can cause photosensitivity – limit sunbathing.

Julian Barker (2001) The Medicinal Flora of Britain and Northwest Europe