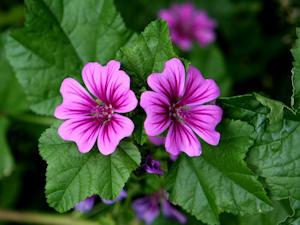 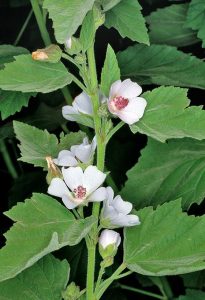 Mallows belong to the Mallow Family (Malvaceae) which are mostly concentrated in tropical regions, and contain a lot of well known & economically important species: Okra, Cacao, Cotton, Hibiscus & the Lime Tree (Linden). The entire family is rich in slippery ‘mucilage’ and is generally a very safe family.

Common Mallow can be found growing erect or prostrate. Its leaves are kidney shaped, and palmately lobed, with dentate margins. Often the leaves have a purple spot in the centre of the leaf base, and they have long petioles. Crushing a leaf between your fingers will exude a slimy mucilage which is present in all parts of the plant. It is commonly found in Scotland on roadsides, wastegrounds, & hedgebanks.

Marshmallow is an erect & very velvety downy perennial herb, growing to 2 metres with a branched stem bearing stalked, roundish 3-5 lobed leaves, folded like fans. It produces pink flowers growing together in leaf axils. It is found much less frequently than Common Mallow, and grows near salt & brackish marshes & ditches in England & Wales. It is rare in Scotland. Nowadays Marshmallow is imported from Eastern Europe for use as medicine in the UK. 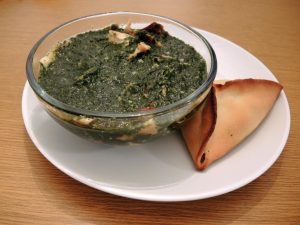 Harvest leaves in spring/summer, flowers from late spring, seed pods early in summer & roots later in autumn. Malva sylvestris is a biennial/perennial growing to 0.5m at a fast rate, it is hardy and resilient & easy to grow. Low growing Common Mallow leaves are good at accumulating metals from vehicle exhausts, & can concentrate nitrates (especially from inorganic farm fertiliser): be conscientious about harvesting healthy plants in clean areas. Althea officinalis can grow to a great height and will need some supports.

Leaves are best used fresh, but can be dried for later use.

Cautions & Contraindications: Marshmallow Root can delay absorption of other drugs taken at the same time.