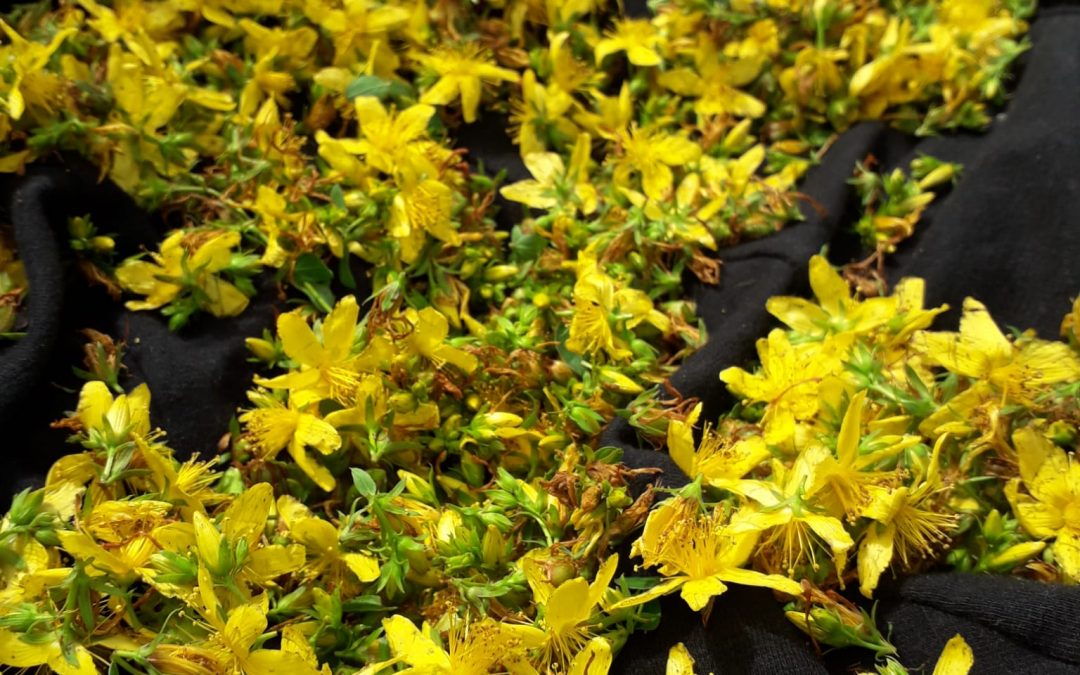 Identification: A herbaceous perennial (i.e. lives for a number of years, but dies back over winter), which grows freely in uncultivated ground, woods, hedges, roadsides and meadows. Leaves are pale green, oblong, and have oil glands which can be seen by holding the leaf up the light – appear as dots or ‘perforations’, hence the latin name. Flowers are bright yellow, & appear from June to August.

Growing: St John’s Wort is a perennial, clump forming herb which is easy to grow. It prefers a moist soil, but can thrive on most soils. Seeds usually germinate in 1-3 months, and it can be planted out to its final position in summer. Divide clumps in the winter.

History and Folklore: The therapeutic value of St John’s Wort has been documented in official medicine since the time of the Greek physician Hippocrates in the 5th Century.

It has always been associated with the power of “good,” and was used to celebrate midsummer and the solstice. In Aberdeenshire it was said that placing a sprig of St John’s Wort under your pillow on St John’s eve would ensure life for another year.

St John’s Wort and Wood Betony were known as the two most important plants for psychiatric problems in the Middle Ages, which were then called the ill effects of witchcraft and demons.

For its main reputation in folk medicine for lifting the spirits, it is referred to as the ‘sunshine herb’.

“So then about her brow

They bound Hypericum, whose potent leaves

Have sovereign power o’er all the sullen fits

And cheerless fancies that besiege the mind;
Banishing ever, to their native night,

Dark thoughts, and causing to spring up within

The heart distress’d a glow of gladdening hope,

And rainbow visions of kind destiny.”

In official Physick medicine, its chief usage was as a wound-healer.

It is not advised to take this herb during pregnancy. St John’s Wort may either counteract, or exacerbate the effects of other drugs (due to its action on metabolising toxins in the liver), and so it is not advised to combine it with other prescribed medication, particularly anti-depressants, the contraceptive pill, Warfarin, Theophylline, epilepsy medication, HIV medication.

If in any doubt, check with your medical herbalist

Plants for a Future www.pfaf.org