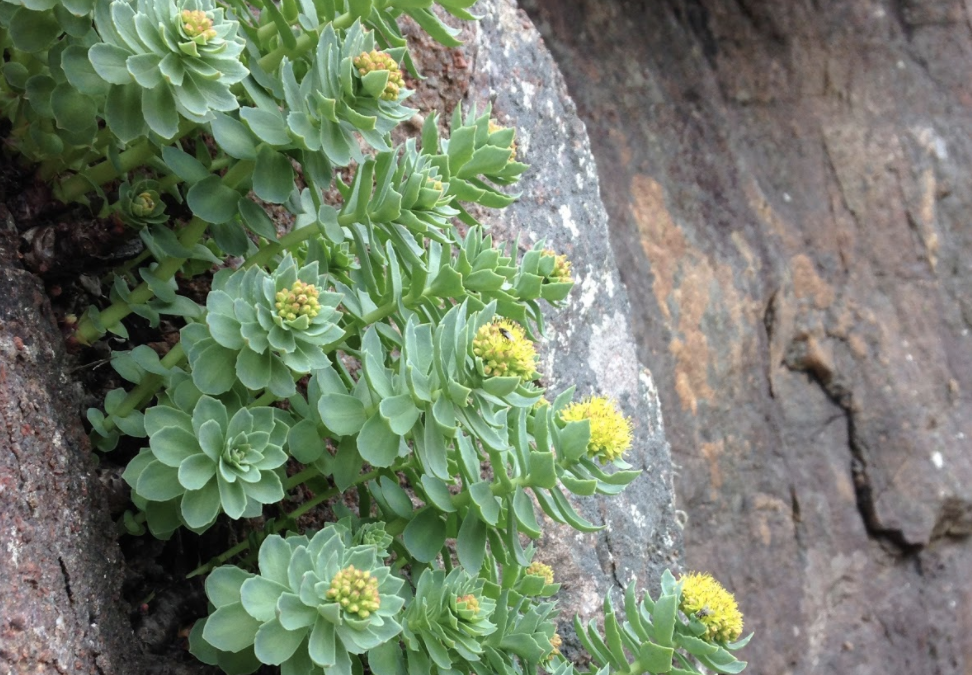 Identification: Low short, hairless succulent perennial with thick finely toothed grey green leaves, can be red-tinged at margins. Flowers orange-yellow, four-petalled in dense flat topped clusters, male and female flowers on separate plants. Rhodiola rosea grows in cold regions of the world, including much of the Arctic, the mountains of Central Asia, scattered in eastern North America and mountainous parts of Europe. It grows on sea cliffs and on mountains at high altitude. Rhodiola is a rare plant with a specialised habitat under threat from climate change and habitat loss.

Parts Used: Commonly the root, however some sources list stem, flowers leaf and seed, but there is less information on this.

Edibility & Nutrition: The young succulent leaves and shoots are eaten raw or cooked like spinach. A slightly bitter taste, some find them unpleasant on their own though they can be used as a small part of a mixed salad. They can be made into a sauerkraut. Stems – cooked and eaten like asparagus. Root – raw or cooked. It was fermented before being eaten by the N. American Indians

Growing & Harvesting: Prefers a fertile well drained open loam in a sunny position. Surface sow seed in a sunny position in a greenhouse in spring. Prick out the seedlings and grow them on in the greenhouse for their first winter. Plant out in early summer of the following year. Cuttings can be taken in the growing season. Basal shoots in early summer are easiest. Harvest the shoots with plenty of underground stem when they are about 8 – 10cm above the ground. Pot them up into individual pots and keep them in light shade in a cold frame or greenhouse until they are rooting well. Plant them out in the summer. Tolerates fairly damp conditions but prefers a raised well-drained spot. Established plants are drought resistant. Plants often self-sows when they are growing in a suitable position. They can self-sow to the point of nuisance. Male and female plants must be grown if seed is required.

History & Folklore: Roseroot gets its common name because its root smells of Damask roses when cut, and it was widely grown in cottage gardens to make rose scented water, and to supplement perfume in pot pourri. Traditional folk medicine used R. rosea to increase physical endurance, work productivity, longevity, resistance to high altitude sickness, and to treat fatigue, depression, anemia, impotence, gastrointestinal ailments, infections, and nervous system disorders. In mountain villages of Siberia, a bouquet of roots is still given to couples prior to marriage to enhance fertility and assure the birth of healthy children. Siberians found the root so valuable they would trade it for wine, fruit and honey. Vikings used it to enhance mental and physical endurance.

Cautions & Contraindications: Can cause irritability and sleep disturbance, and insomnia in sensitive people. Avoid with people that experience manic episodes. Avoid in pregnancy.

Plants For A Future (2012) Available from: www.pfaf.org.uk