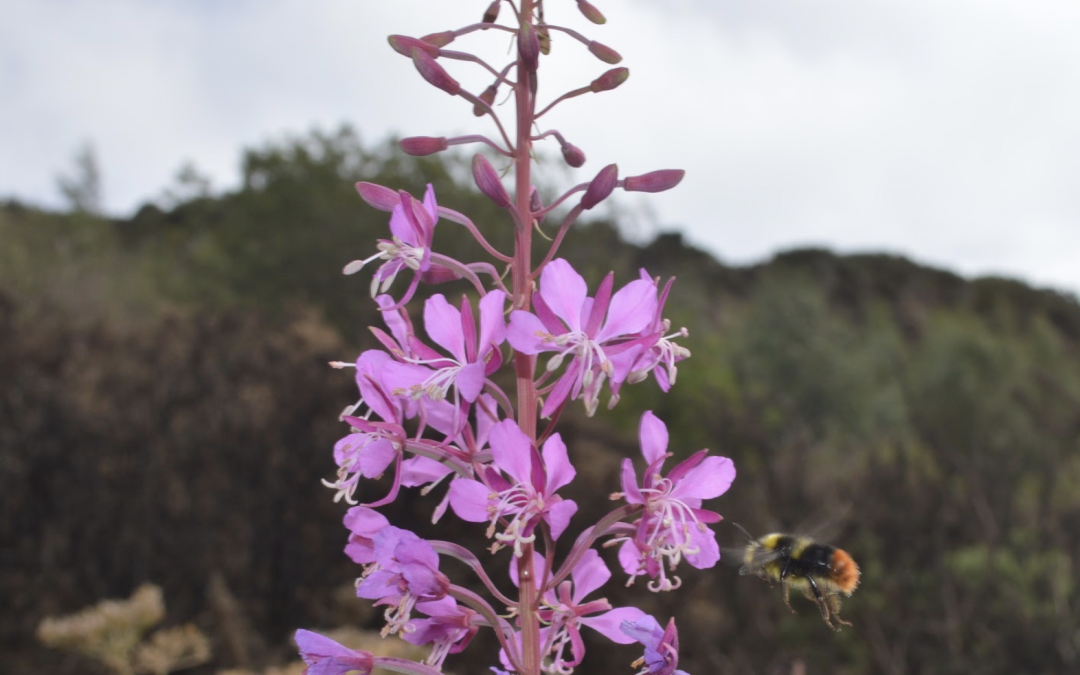 Botany & Identification: Widespread in the British Isles & spanning Europe, temperate Asia & parts of the Americas, this tall perennial gives a beautiful pink brush over the landscape in summer. Spreading readily by its bee pollinated seed heads and by lateral roots it quickly develops large stands up to 2m high. Often seen along railways and roadsides where by the passing vehicles aid seed dispersal, it is also common to forest edges & meadows. Fireweed is noted for attracting wildlife and usually flowers from July through to September, with seeds ripening from August. Lanceolate (willow like, hence the name Willowherb) alternate leaves with a smooth margin spiral up the stem. The latin epithet angustifolium means ‘narrow leaved’. The pink flowers grow on spikes and are 2-3cm across.

Growing & Harvesting: Fireweed is very easy to find in the wild and is suited to well drained soils, thriving in full sun or semi shade. It is one of the first plants to seed after disturbance like wildfires.

Leaves and stems are harvested to eat in the spring, with leaves and flowers harvested for medicinal purposes when the plant is in flower. Herbalist Henriette Kress uses only the leaves, harvested just before flowering, and gathers the flowers to beautify tea blends.

Edibility & Nutrition:  In the spring Fireweed shoots can be eaten raw or cooked – similar to how you may steam asparagus, and contain protein, Vitamin C, flavonoids and beta-carotene.The young leaves should be pointing upwards. The young leaves can be eaten like spinach, but as the plant develops the leaves become fibrous and unpleasant to cook with. Leaves are high in Vitamin C and Protein. The flowers are edible, quite bitter, but look pretty in salads etc. Larger stalks can be split open and the apparently sweet inner pith harvested.

Uses: Fireweed has a wide distribution and has been used by many different cultures. In the Americas the herb has been used as medicine by indigenous people from Alaska, right the way down the West Coast of North America.

Balancing digestion: Just as Fireweed helps to begin the cycle of succession, opening up ecological niches for other plant species and thereby increasing diversity and strengthening the system, we can also think of it taking on a similar role in our bodies. The herb supports the digestive environment where beneficial gut flora can flourish and increase in diversity. This enhances the efficiency in the small intestine and colon of bringing in nutrients and removing waste products. Western modern medicine is rediscovering the importance of a healthy functioning digestive system, relating it to a strong immune system and mental health. Many traditional healing practices have viewed healthy digestion as central to maintaining health.

The bitterness of the leaf increases general enzyme production in the stomach lining and pancreas, which results in it being useful to take before dietary changes, or drank regularly to aid digestion of foods that aren’t consumed very often. It’s astringency further helps to tone the intestines and can be used for chronic low-grade diarrhoea or IBS. It can be used in the same way after food poisoning, but note that as the herb is not antibacterial, the infection should be treated first, with Fireweed helping the body to recover afterwards. Herbalist Henriette Kress uses it as a base in tea blends for digestive issues and it was traditionally used to ease the ‘green diarrhoea’ which happened when folks changed their diet from winter stored foods to fresh spring greens. Fireweed is also astringent and therefore tightens and tones tissue in the colon. The anti-fungal properties extend digestive rebalancing to growths such as Candida. The herb is best used over time, slowly allowing the body to strengthen the digestion.

Soothing action: The herb is high in mucilage (especially the spring shoots) and tannins, giving it its ability to both soothe and tone and so being an effective anti-inflammatory. This astringent and emollient action can be used for the digestive tract, sore throats, inflammation of the mouth etc.

Fireweed’s antispasmodic and mucilaginous properties are also useful for asthma, whooping cough, hiccoughs, coughs and intestinal spasms, with the herb also traditionally being used for sore throats and lung congestion .

Preparations & Dosages: 1-2 tsp dried herb to a cup up to three times a day

A note on other Willowherb species:

Other Willowherbs of the genus Epilobium spp. Have also been used medicinally. The UK has about 10 species which hybridise readily. Herbalists Julie Brunton-Seal & Matthew Seal state that any of the willowherbs can be used with the exception of Great Willowherb (Epilobium hirsutum).  The small willowherbs are a specific remedy for prostate problems, helping to shrink tissues, stop cell proliferation and normalising urinary function. Henriette Kress also uses Fireweed leaf to treat benign enlarged prostate. The small flowered willow herbs are effective to a wide range of bladder and urinary issues with the astringent and diuretic action toneing and detoxifiing the urinary tract.