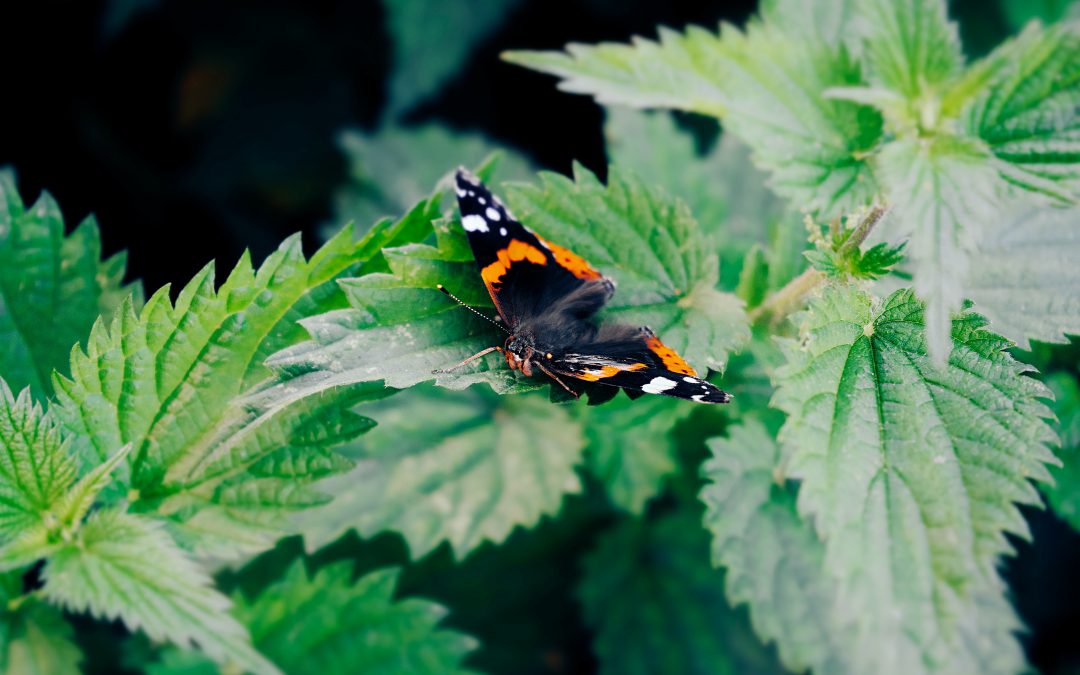 Identification: Cordate leaves which taper to a point and are toothed. Green flowers in long, branched clusters spring from the leaf axils. Urtica dioica is ‘dioecious’ meaning individuals are either male or female. The male flowers are barren and have stamens only, and the female fertile flowers have seed producing organs. Usually the female flowers hang down, and the male flowers protrude outwards. The whole plant is downy and covered in stinging hairs – each hair is a very sharp, hollow spine, filled with formic acid. Urtica urens is a smaller, annual Nettle, with a milder sting, and with male and female parts on the same plant. It can be used interchangeably with U.dioica.

Edibility & Nutrition: A very edible and very nutritious plant! Nettle leaves have an old reputation as a pot herb and can be included in many dishes as a spinach substitute. They were often part of traditional kail in Scotland – a vegetable soup eaten as the main meal of the day. Nettles are a free & complete natural vitamin & mineral supplement: high in protein, vitamin C, vitamin A, vitamin K, and Calcium – with levels far outstripping many of our common vegetables.

Growing & Harvesting: There is very little need to grow nettles, as they are so abundant in the wild. Unexpectedly, they have been found to be difficult to reliably cultivate, as to grow to their usual height, they require a very rich soil. Nettles are known as ‘Dynamic Mineral Accumulators’: plants able to extract minerals from the soil in high levels. You can thus use them to help your other plants grow by making a simple Organic Liquid feed. To pick Nettles leaves or seeds it is best to wear gloves. Nettle leaves should be harvested before the plant is in flower, as older leaves can develop gritty particles called cystoliths which can irritate the kidneys.

The Latin Name Urtica comes from the Latin uro to burn. Its common name, and Anglo Saxon equivalent Netel, is said to have come from Noedl (a needle), possibly to do with its sharp sting, but also because of its history as a fibre for spinning and sewing before Flax and Hemp were introduced to Northern Europe. Nettle then could mean – that with which one sews. The whole plant was sacred to the Anglo Saxons, and remains of Nettle Sheets have been discovered at Bronze Age sites. Nettles have had a particular significance in Scotland, used as a food, medicine and fibre for centuries. In the 18th Century poet Thomas Campbell complained of the English’s lack of interest in Nettles – “In Scotland”, he said “I have eaten Nettles, I have slept in Nettle sheets and I have dined off a nettle tablecloth”

Preparations: The leaf can be used as an ingredient in any recipe that calls for spinach: soup, Nettle pudding (Scottish), curries – Nettle aloo, quiches, bean dishes or just juiced and drunk fresh. Nettle seeds can be eaten raw, or dried and made into a salt.

Cautions: in therapeutic doses Nettles can interact with diuretic drugs and drugs which lower blood pressure (by potentiating their effect). Avoid Nettle Root during pregnancy

Plants For A Future (2012) Available from: www.pfaf.org.uk