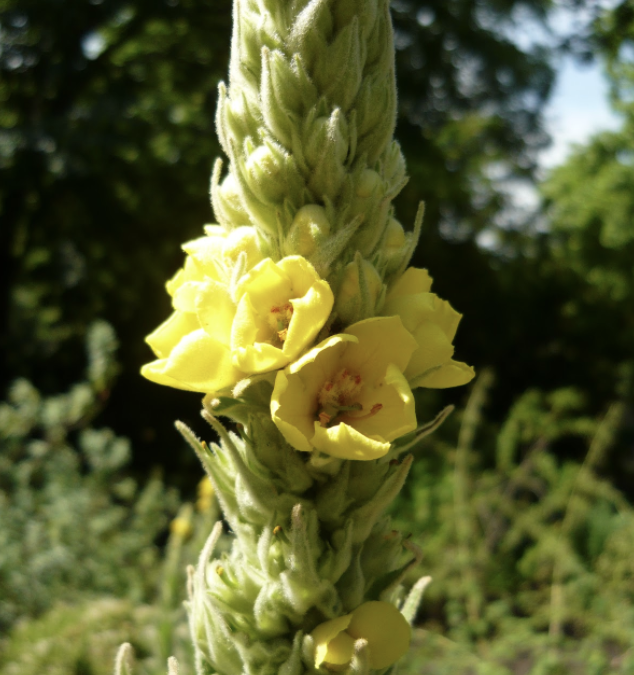 Parts Used: Dried leaves and flowers, some use of the root.

Botany & Identification: A biennial plant growing a downy basal rosette of leaves in its first year, followed by a tall flowering spike in the summer of the following year. The yellow blooms reach up to 2m. Mullein is a plant of dry, sandy and chalky soils often seen in hedgerows and field boundaries.

Native to Europe, North Africa and Asia, the herb is also naturalised in parts of North America. Common in Britain except in the far North and West. Julie Brunton-Seal and Matthew Seal state that any of our tall and yellow flowered Mulleins, and the White Mullein (Verbascum album) can be used medicinally.

Growing & Harvesting: As Mullein is a biennial, the leaves are harvested in the first year before they brown. Some suggest harvesting the leaves in the spring of the second year when about to flower so identification is correct. Flowers are collected in the second year between July-September in dry weather. Henriette Kress suggests harvesting the whole flowering spikes and hanging them to dry, then using gloves to protect the hands from tiny hairs to strip the stalk and store the flowers in jars. Dry Mullein in the shade.

Edibility & Nutrition: The leaf contains Potassium and Calcium and although leaves and flowers are edible, it isn’t common.

Uses:  Herbalist Matthew Wood describes Mullein as ‘one of the premier cough and respiratory remedies of the European tradition’, with David Hoffmann stating that the herb ‘is useful in most conditions that affect this (respiratory) system.’ The herb is indicated for dry tissue states, or where liquid is isolated in pockets around the body for example in abscesses or swollen glands. The salty mucilage released by the leaves is used as an emollient to soften dry tissues. In Scotland the herb was used to treat coughs and tuberculosis as well as for piles, diarrhoea and bleeding of the bowls and lungs. Mullein has a primary action on the respiratory system, but also strengthens the nerves, digestion and urinary system, helping to relieve pain.

Preparations & Dosages: The leaves as infusion. 1-2 tsp dried herb in a cup of boiling water. Repeated 3 times daily. If using dried leaves strain through a fine mesh to remove any loose hairs which can cause irritation.

Oil: Flowers extracted into olive oil in the sunshine. 1-3 drops of oil in or behind the ear as needed.

Cautions & Contraindications: In its first year Mullein can look similar to the toxic Foxglove. If unsure wait till the flowering spike appears in the second year and pick young leaves then. Mullein is covered in tiny hairs, so strain any internal medicine through a fine mesh like muslin.