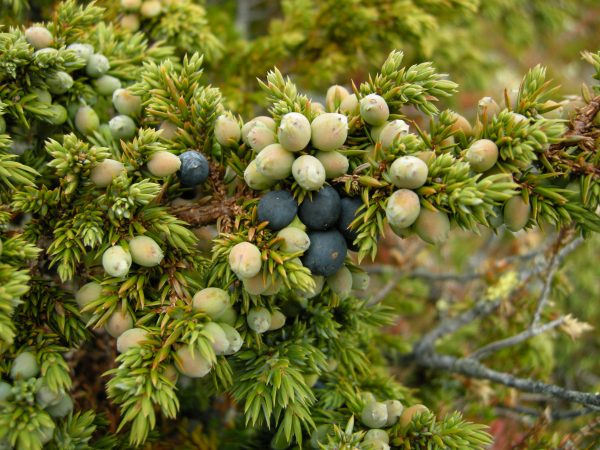 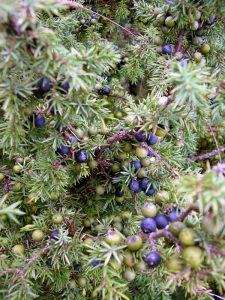 Botany & Identification: Juniper is a slow growing evergreen shrub in the Cypress family growing on heaths, moors, rough grassland and dry woodlands. It can reach up to 3m and spreads up to 10m. Small yellow flowers are followed by the ‘berries’ (actually fleshy cones) that are initially green, turning to a blue-black. It is dioecious – having male and female flowers on separate plants. Juniper is wind pollinated.

Juniper is found in many places in the Northern Hemisphere spanning Europe, North America, Asia and North Africa, Juniper has its origins in the Triassic period – about 250 million years ago. At this time all these areas were attached together in one large landmass called Pangea, which explains how this species is native to many different continents today.

It is a very variable tree, with 3 subspecies currently accepted in Britain. J.communis ssp. Communis is found throughout the British Isles, J.communis ssp. Nana is found in the West and North and J.communis spp. Hemisphaerica has only been recorded in Pembrokeshire and Cornwall. These 3 subspecies are hard to tell apart and most people identify the shrub to species level and just leave it there! 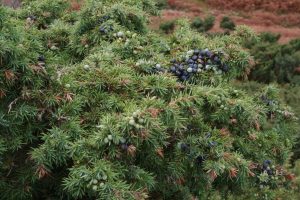 Juniper can occupy different ecological niches depending on it’s situation. In scrubland it can be the dominant canopy as a bushy shrub as there are no trees present. In heathland and exposed areas it can grow prostrate along the ground. It is largely a woodland pioneer species occupying skeletal soils and growing in full sunlight.

Juniper is the most widespread conifer globally, and whilst in general the population is increasing, the UK population is in fact declining. This is reported to be caused by shifting agricultural practices (reduced low-intensity farming) and being out-competed by other species in the changing climate. On the IUCN (International Union for Conservation of Nature) Red List Juniper is of ‘Least Concern’, however it is listed as a priority species on the UK BAP (Biodiversity Action Plan) due to its recent decline.

Growing & Harvesting: Juniper can take 7 years to reach a height of 20cm! The shrub prefers free-draining soil and can grow in both very alkaline or very acidic soils. Juniper requires no or low shade and can tolerate high and maritime exposure.The berries take 2 to 3 years to mature, with all ages of berries being found on one plant. The ripe fruit should be collected in the autumn and dried in the shade to maximise the preservation of oil content.

Edibility & Nutrition: The fruit is often used as a highly aromatic flavouring in various foods such as Sauerkraut and is an essential ingredient of gin. Tea has been made from decocting the leaves, stems and berries.

Uses: The main uses of Juniper are associated with its volatile oil content and its warming, drying action.

Juniper symbolises cleansing, protection and humility. The Romans used Juniper medicinally in the Lothians for purging, stomach ailments, epilepsy and purification. Historians are unsure whether they were taught this knowledge by the locals or if they brought it with them. There are records from the highlands of folk traditions treating epilepsy with the plant.

The middle ages saw mass deforestation across Europe. At this time the juice was also discovered as an apparently effective contraceptive. Due to this the Church ordered many Junipers to be felled to protect the birth rate. Another reason for its decline is that Juniper wood burns smokeless, and was therefore used to fuel illegal whiskey stills allowing their locations to be kept from view.

Juniper trees were believed to have the ability to avert evil and have great powers of protection and purification. In Sutherland the wood was used as babies teething rings so they were protected from harm. Sometimes small branches were tied to the tails of animals for protection

Branches were burned whenever illness struck a household. The home would be sealed and the smoke allowed to fill the space until the ill were coughing, spluttering and ridding themselves of any illness. The doors would then be thrown open and the inhabitants revived with whiskey!

Medicinal alcohol beverages using Juniper berries can be traced back to Galen in the second century. The word ‘Gin’ is derived from genievre and jenever – the French and Dutch for Juniper. The Dutch were already distilling gin when the British went to aid them in their conflict with Spain in the fifteenth century. Here they learned to take a little before going into battle – some ‘Dutch courage’.

Today, gin distilleries apparently prefer berries from Tuscany, Morocco and Eastern Europe, much of this being wild harvested by traditional methods of lying tarps down under trees and hitting them with sticks to loosen the ripe berries.

Infusion: 1 cup of boiling water to be poured over 1 tsp crushed berries. Infused for 20 mins and drunk three times daily.

Cautions & Contraindications: Avoid in pregnancy. Not to be taken in the presence of kidney disease as the volatile oils in the herb stimulate the kidney nephrons. If being used internally, breaks should be adhered to every fortnight. Juniper is on the European Red List for Medicinal Plants.