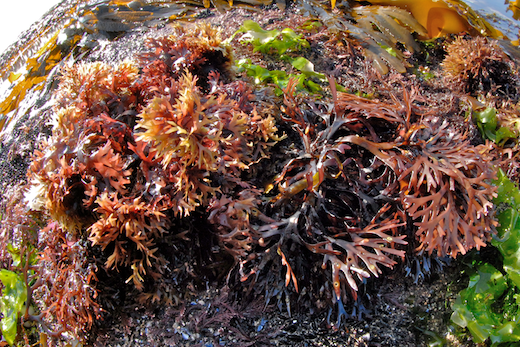 Botany & Identification:  Irish Moss is a member of the division Rhodophyta (the red seaweeds), and is commonly found on rocky shorelines below and just above the low tide mark. Found on both sides of the Atlantic Ocean, it can be commonly found and harvested all year round. It is rarely found out of the water except at the spring low tides. It is extremely variable in appearance: branches are broad, flat, narrow, or twisted and brown, yellow, red or white. Its darker colour bleach to white/yellow in sunlight. It is identifiable by touch – wiry, bushy consistency unlike other species of seaweed. It rarely exceeds 15-20cm in height, and its branches/fronds are between 2-15mm. The best way to tell it apart from a similar species Mastocarpus stellatus is its lack of grooves, warts or bladders. (These two seaweeds can be used interchangeably as a food anyway.)

Growing & Harvesting:  Caragheen is best harvested in spring & summer but can be collected year round. Use scissors and cut at least one third of the way up the holdfasts so the thallus (its shoots) of the seaweed can regrow. Once harvested, wash thoroughly and leave outside to dry, turning them over occassionally. It doesn’t matter if it is damp or rainy outside, they will still dry. Seaweeds are very effective at absorbing heavy metals & pollutants so it is extremely important to harvest in clean waters.

Edibility & Nutrition: Caragheen is edible, and very nutritious. It doesn’t really have a flavour, more a ‘texture’ of gloopiness. Irish Moss has a high mineral content, and is said to contain 15 of the 18 elements found in the body including iodine, bromine, iron calcium, potassium, sodium and magnesium.

Constituents: a trio of polysaccharides collectively called ‘carragheenan’, up to 80% mucilage, mineral salts & vitamins A and B

Decoction: This is best decocted to bring out its mucilage, and there are numerous traditional recipes for Irish Moss decoctions with Iceland Moss, Comfrey Root, & honey to treat lung conditions, sore throats or wasting diseases. It can also be decocted with cocoa or just milk for a convalescent drink. Drink freely

Generally very safe with a few cautions: seaweeds contain naturally high levels of iodine which may not be suitable for some.

Caution for those with shellfish/fish allergies as harvested seaweeds can’t be guaranteed not to contain parts of these. Caution in harvesting from polluted waters. Caution when taking anti-coagulant medicines.