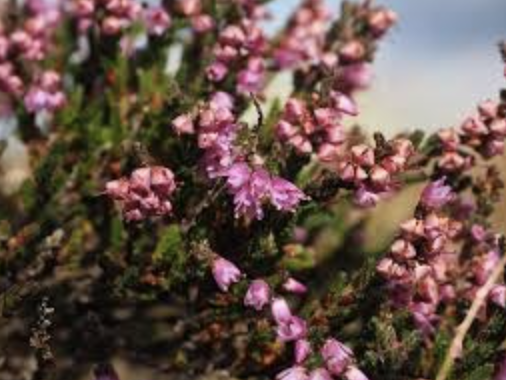 Heather is a common plant found in Europe, West Siberia and North America (introduced) where it grows on bogs, moors, heaths and open woodland. It mainly grows in acid, peaty or rocky soils. Heather is an evergreen small (sub/under) shrub that forms dense carpets, often growing to 50 cm and sometimes reaching 1m in height. The scale-like leaves are linear, undivided and alternately arranged.

The bell shaped pink/purple flowers bloom on leafy spikes in late summer. They cluster along one side of the stalk in a dense raceme and are rich in nectar attracting butterflies, moths and bees which produce the highly sought after heather honey.

The UK also has 10 species of heath in the Erica genus, including bell heather, E.cinerea. In Scottish tradition heather (Calluna vulgaris) and bell heather (Erica cinerea) were often written about and used interchangeably. Bell heather has a longer flowering period from May-October with larger bell shaped blooms of a slightly darker colour. In Scotland the third most common species after heather and bell heather is bog heather, E.tetralis. The heathers are so dominant in their habitats that they have given their name to them – Heaths.

Heather, like other members of the Ericaceae family needs acidic soil below pH 6.5 to grow. They thrive in a sunny position, but will tolerate light shade

Uses: Historically, Heather has never been an official herb of medicine but has been used extensively by the communities dependant on this dominant moorland landscape species.

Modern studies suggest that Heather could be useful in medicine today with research undertaken in 2011 finding Heather to have a potentially photoprotective action against UV rays on the skin.

In Bach flower remedies Heather is said to help improve personal relationships for people who always want to talk about their own issues, and don’t like being left alone. Dr Bach described heather people as seeking the companionship of anyone available so as to always be around others.

In Scotland some of our Heather moorland is the result of overgrazing, deforestation and rotation burning for the grouse-shooting industry, freezing the natural process of ecological succession. This landscape has been with us for a long time however, and Tess Darwin writes:

‘Of all Scottish wild plants, the prize usefulness must surely go to heather. In a typical dwelling in many parts of Scotland until this century, Heather might have been found in the walls, thatch, beds, fire, floor mats, ale, tea, baskets, medicine chest and dye pot, being used to sweep the house and chimney, to feed and bed down sheep and cattle and to weave into fences around the farm’.                               – The Scots Herbal

Cautions & Contraindications: Heather is generally considered a safe herb, though it is not considered safe to treat kidney disease unless under supervision of a medical professional. When kidney function is deficient there is greater chance of harm to the body with herbs & other drugs.