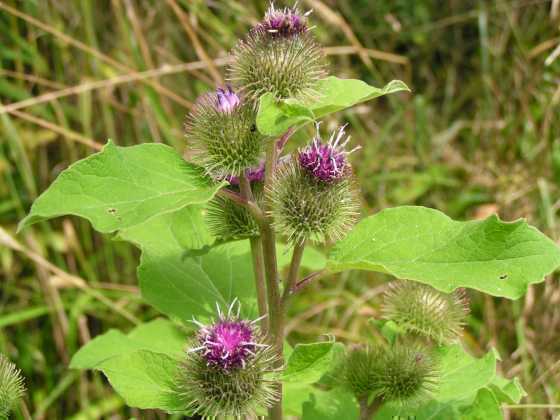 Botanical Name: Arctium lappa, A. minus, A. nemorosum

Botany & Identification: A biennial native to temperate Europe & northern Asia. There are three species in the UK: Lesser Burdock (A. minus), Greater Burdock (A. lappa), and Wood Burdock (A.nemorosum) with lesser Burdock being the most common. Greater Burdock is mostly found in the Southern half of England & Wales. The Arctiums are downy, branched herbs with large oval-cordate leaves, red purple florets covered in involucre bracts with spreading hooked tips which form burrs and attach to clothes etc. Flowers from July to September.

Growing & Harvesting: A biennial – dig the roots at the end of the first year. Seeds are harvested just after the end of the second year. Roots are high in oils and can easily go rancid – they need to be dried with artificial heat and left out in open air. Harvest the seeds by putting them in a strong paper bag and hitting with a hammer to separate from the strong prickly burrs.

Regulates Oils in the Body

A medicated oil can be used externally for hair and scalp conditions.

Avoid in Pregnancy. Avoid with antidiabetic drugs & as it can potentiate their hypoglycaemic action. Burdock can be a strong herb which can cause ‘cleansing reactions’ like initial skin eruptions, headaches or tiredness. Start with a low dose and increase gradually.